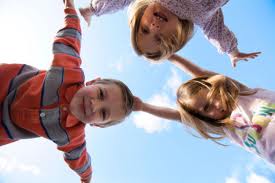 6 Am in the morning , I walked into my daughter’s room and she was gone. Gone. Really gone.  Gone from her bed, gone from her room, gone from all her siblings rooms and gone from the whole house. I woke my husband up. “This is real,” I said “She’s not here”. Outside it was pitch black and inside the world started spinning.

I had gotten up early that morning to take my 10-year-old daughter out for a special reason. Friends of ours (Summer and Jerome from “The Kosher Warriors”) had recently had a baby and that morning was the bris.  Minky had planned to get up at 5:30 and I had planned on taking her to Summer’s house at 6 so she could help out.

Now, she was nowhere to be found. We called Jerome – no answer. We called Summer – no answer.The whole thing made no sense. Where was she? She wouldn’t have gone outside in the dark? Ten minutes later we finally got through to Jerome. He said, “We got her, she’s been on our porch since 5:45”

Could you believe it? I couldnt believe it! It still boggles my mind that this little girl had that much oomph and fearlessness!

I was stumped. Here was a kid who put herself in a life threatening situation, walking in pre dawn hours, who most likely had an inkling that it wasn’t the best idea but did it anyway. On the other hand, here was a kid who felt on top of the world doing a chesed and was willing to wake up early to help out a friend.

So what to do?

What did I do?

My first reaction had been “Wow, that is so dangerous! We have to teach her a lesson!” And I started wracking my brains about what action to take that would scare her sufficiently that there wouldn’t be a repeat scenario. But when I saw her, when I really saw her, not a little perpetrator that I was ready to condemn for the fright she gave me, but a little girl with a big heart and a will of iron, I changed course. I said a few clear words to her about how dangerous it was, and how she should never do it again, while giving her a hug. I saw she got it.

So we attended the Bris and it was beautiful but all the time I was thinking. “Okay, that was the preliminary action, but what do  I really need to do here?” There was a little part of me that felt that if this didn’t have a concrete consequence , she wouldn’t learn the lesson.

But as the hours passed,  nothing felt right to me. It didn’t make sense to repay the good with bad. I just needed her to know just how dangerous what she did was. The main thing is that she learned to be safe. So I  had a small strong talk about the dangers of being out alone and made sure she knew that it was never to be repeated. Ever. And that was that

That was two weeks ago and as time passes, I’m happier and happier that I didn’t punish her. My willingness to understand her softened her heart to my message of safety and it penetrated. No matter how just a consequence would be, all she would have felt is resentment. “But it’s not fair, I was trying to do something nice!” It would be as if I didn’t see her, see her goodness.

A while ago I had my then three year old in a playgroup. I didn’t love the playgroup and  took him out in the middle of the year. One memory stands out in particular. When a child would misbehave, the teacher would put him in the “Tzadik Corner (the Righteous Man’s Corner”), a wall which was covered with portraits of tzadikim. There he would sit to learn how to behave. I’m ill just thinking about it. What was really going on was ; there he would sit to be shamed in the company of serious bearded faces. OH! the horrible associations a child can make! As if G-d Himself was dissaproving!  And  it was more than just the method, it was the attitude towards children.

Contrast this. A few years later I was looking into a Jewish Montessori school for my other 3 year old son. One of the questions I asked the principal was “What do you do when they don’t behave?” She said, “Boruch Hashem!  (Thank G-d!) Each one of them is so good!” with a huge smile. I  couldn’t help smiling with her, but I pressed on. “But what if a child really does something wrong?” She looked up at heaven and said “Boruch Hashem!  They’re so special!”

Now, this woman runs a whole school singlehandedly, and its been around for years. Don’t think that there are no guidelines for the children.  The whole school is structured on the balance of guidelines and free play. But listen to her attitude. She simply would not condemn children.

It’s something to think about.

Do we complain about our kids? Do we truly believe in them as people? Do we see them as the precious piece of purity that they are? Have we succumbed to  “good girl, bad girl attitudes?”

Sure, children don’t always do the right thing – but  let’s understand that that’s perfect. That’s how it should be – they’re children and they’re learning. Our job as adults is to teach them right from wrong through instruction and through  modeling. There are times that call for consequences or punishment and I’d like to address those in a different post. Todays’ post is on attitude. How we percieve our children is a critical launching point for our subsequent responses.

My sister in law is the mother of eleven. Here’s how she looks at her kids.

“Suuuure, it would be my pleasure, my little sweet nesahama (soul)

“Can you help me”

“Sure, my sweetness, my golden girl, I”ll be there as soon as I can”

She speaks this way to her kids of all ages. It’s an outpouring of love.

I’m telling you, when you’re around her, you just become a nicer mother. You hear her language and it resonates.

“Yes, my child is a treasure!”

What we say reflects how we feel. We can use that as a starting place for working on a truer, kinder view of children

Try these words out at home. Start a ripple effect. Let it begin with your tongue and travel to your heart.  Make a wave of positivity and bathe your children in it. Wash away the condemning attitudes and revel in your children!